Joined Feb 20, 2015
·
54,604 Posts
This is pretty damning stuff from the Chinese government if true. See New York Times piece below: 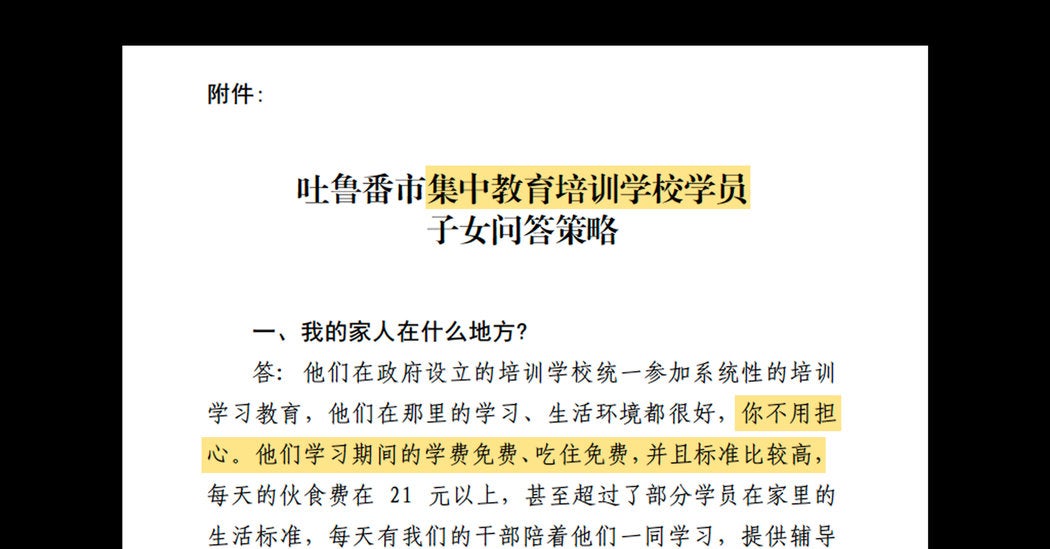 More than 400 pages of internal Chinese documents provide an unprecedented inside look at the crackdown on ethnic minorities in the Xinjiang region.
www.nytimes.com

HONG KONG — The students booked their tickets home at the end of the semester, hoping for a relaxing break after exams and a summer of happy reunions with family in China’s far west.

Instead, they would soon be told that their parents were gone, relatives had vanished and neighbors were missing — all of them locked up in an expanding network of detention camps built to hold Muslim ethnic minorities.

The authorities in the Xinjiang region worried the situation was a powder keg. And so they prepared.

The leadership distributed a classified directive advising local officials to corner returning students as soon as they arrived and keep them quiet. It included a chillingly bureaucratic guide for how to handle their anguished questions, beginning with the most obvious: Where is my family?

The directive was among 403 pages of internal documents that have been shared with The New York Times in one of the most significant leaks of government papers from inside China’s ruling Communist Party in decades. They provide an unprecedented inside view of the continuing clampdown in Xinjiang, in which the authorities have corralled as many as a million ethnic Uighurs, Kazakhs and others into internment camps and prisons over the past three years.

The guide recommended increasingly firm replies telling the students that their relatives had been “infected” by the “virus” of Islamic radicalism and must be quarantined and cured. Even grandparents and family members who seemed too old to carry out violence could not be spared, officials were directed to say.

Students should be grateful that the authorities had taken their relatives away, the document said.
Click to expand...

If one wants to understand why Hong Kong is so up in arms to be distinct from China (amid their own internal and self-wounding turmoils), this is just one example.
6

Joined Mar 17, 2013
·
11,640 Posts
Yeah, Uyghur Turks' situation there is pretty bad, but not pointed out a lot by main stream media since they are not Christians I guess.

Joined Jul 7, 2014
·
887 Posts
Yeah they should embrace diversity and the Islamic trucks of tolerance.

ne znam ali mozda said:
Yeah, Uyghur Turks' situation there is pretty bad, but not pointed out a lot by main stream media since they are not Christians I guess.
Click to expand...

Quite the opposite. Their plight is not pointed out a lot by the left wing media because those particular Muslims can not be used for anti-Israeli propaganda.
1 - 4 of 4 Posts
Join the discussion
Continue with Facebook
Continue with Google
or sign up with email
About this Discussion
3 Replies
4 Participants
Last post:
buddyholly Nov 17, 2019
Mens Tennis Forums
A forum community dedicated to male tennis players and enthusiasts. Talk about everything from the ATP, NSMTA, to college Tennis and even everything about equipment. It's all here!
Full Forum Listing
Explore Our Forums
General Messages Non-Tennis Challengers threads The Federer Express DjokoLand
Recommended Communities