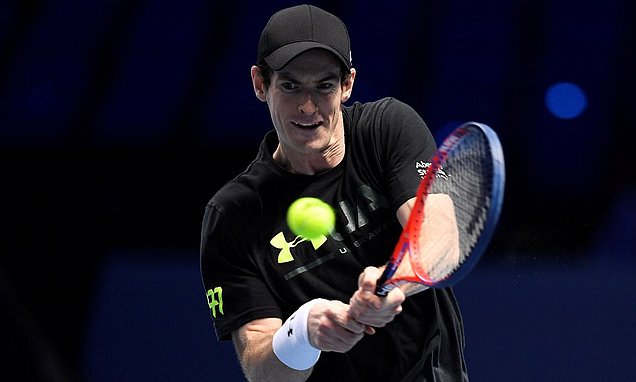 Andy Murray withdraws from tournaments in Montpellier and Rotterdam

MIKE DICKSON IN MELBOURNE: Andy Murray has issued a concerning update on his latest fitness struggles, stating that he was pulling out of his two scheduled tournament appearances.

Joined Feb 20, 2015
·
52,393 Posts
It's always the marathon that counts. Tough for him.
► Show Full Signature
Waving Wilson magic one point at a time | KEI all the way!!!
Hurricanekori in the house - prepare for the storm

Joined 9 mo ago
·
475 Posts
This is starting to look a bit worrying, even to me.

Everything was going so well for a while for Andy and now he's apparently facing some more serious problems than I ever thought he would be at this stage.

I wonder if he went on to train too much during the off season, just couldn't hold it back even though he was not in the best of condition even at the start of the off season.

They usually say that the first six months after a major hip surgery will tell you a lot about how succesfull the full recovery will be. And there we had Andy playing some amazing tennis again last Autumn, a bit over six months after his surgery. It truly was amazing tennis considering all that he went through earlier, and had not only us true Andy fans, but I feel a huge amount of the tennis fans in general, extremely happy about the results he achieved after the darker times.

I've managed to stay positive so far and trusted that any minor issues there are, Andy will come through those. Now I can only hope that I had a real reson to stay positive all the time and all that's going on right now is just precaution to not disrupt the still on-going recovery process.

After so much hope for better things to come his way eventually after years of struggle, this just doesn't feel fair for Andy.
So I'm kind of closing my eyes from this for a while and trust that there will be better things ahead waiting for him.

Even if the worst case scenario will materialise, there's still so many things in life to enjoy, even tennis-wise, than just playing top level tennis all year round.

Taking care of his body in the best ways available is now the best thing Andy can do, and us fans we will just have to wait a little longer for the season to start for him.

Joined 9 mo ago
·
475 Posts
Thank god we have some very interesting prospects in the tennis world at the moment, so I won't have far too much time to worry about Andy's situation.

I'm not a morning person at all, but already awake here in Finland, as I'm watching our Emil to hopefully get through to the AO MD through the qualies (1st set of didn't go quite as planned, but things are looking better now).

While nothing really compares to having my all time favourite back on competitive courts, I can at least enjoy watching a bunch of these youngsters fighting it out on court.

Joined Jun 27, 2015
·
1,612 Posts
The documentary on amazon really made Andy look kind of insane to still be playing tennis. Like Jesus christ just give it a rest. Also the Swiss doctor who said it can be life threatening. The further on it drags the more depressing it gets.

By now I think everyone can say that he has given this comeback his all, but when the body says no, you should listen to it
► Show Full Signature
Beware the golden muffin

Epic movies, like brokeback mountain, are seldom found in the industry or worthy for the mainstream viewer. As often as I have watched the clips of this movie, I always find something more to it. For one, the gay stuff doesn't enter the picture for me, only the dimension of the highest love I have ever witnessed in life or on film.

Joined May 11, 2014
·
1,334 Posts
Better not expect anything. As the article says, it is uncharted territory for a player to return to singles competition after such an operation.

The almost miraculous result at the end of last year doesn't mean Andy's hip is now as good as new.
J

Joined Jun 4, 2018
·
2,045 Posts
I am sure he is happy with his family, but from a PoV of a champion, it must hurt a lot. In your best years you were facing arguably 3 best players of all time for any title, and once you climbed that elusive No.1 spot, you get injured. I sencerely hope that all of this isn't affecting his mood and private life and that it isn't depressing him, because objectively, he had an awesome career. Yet, these guys have an insatiable hunger and love for their sport...
► Show Full Signature
"Billiard is subtlest game of perfection and logic, it is composed of laws of physics, chess combinatorics and remarkable connection the mind of man and physical motor skills."

Joined Apr 24, 2008
·
21,016 Posts
At this point it seems he's risking his long term health just to get few slam wins or a 250/500 at best, no way should he even think of grind out 5-setters anymore, better switch to doubles or call it a day.
► Show Full Signature
Ne volem nikog lutko

azza said:
Can he just retire and be done with it?
Click to expand...

He didn’t become the greatest champion from my shores that I’ve ever seen by giving up easily.
► Show Full Signature
The Comeback King

HE IS BACK AND TRANSCENDING THE SPORT

HE IS BACK AND TRANSCENDING THE SPORT

Joined Apr 3, 2017
·
8,562 Posts
Any details on what happened? If I had to guess, I'd say he overstressed his poor body in the off season, trying to go back to his slam winning form.
I just wish him a full recovery. The rest is really secondary.
► Show Full Signature
"He's obsessed with the slam record, refusing to marry Xisca just so he can focus on this one thing" - Andrej

"Truth is stranger than fiction, but it is because Fiction is obliged to stick to possibilities; Truth isn't" - Mark Twain

Monsi said:
Any details on what happened?
If I had to guess, I'd say he overstressed his poor body in the off season, trying to go back to his slam winning form.
I just wish him a full recovery. The rest is really secondary.
Click to expand...

I'm also interested in any further details on what's actually going on here. So please do keep the information coming, should you have any.

However, knowing Andy, he's not very likely to reveal a lot about the situation before he knows for sure what he's eventually going to do.

Just like it was before his major surgery: none of us really knew how low he had been at times, considering giving it all up, before he finally revealed it all at AO last year. Due to keeping it all inside him I feel it came out in a bit more dramatic manner than intended.

So hopefully no more such drama this year, I'd just love too see happier scenes this time. But I guess we'll have to wait a bit longer for any more detailed revelations on Andy's condition.
H

Joined Dec 14, 2018
·
539 Posts
Unfortunately "bone bruising in the pelvic area" is not a common thing to keep you out of play for several months. Not being a doctor this is pure speculation from my side, but the impression is that Murray's current problems are related to the hip surgery, in one way or another. As of now, I only wish that he can avoid long term health problems. Seeing him back on court playing at a high level would be a huge bonus, but it is nothing I expect.
1 - 20 of 40 Posts
Join the discussion
Continue with Facebook
Continue with Google
or sign up with email
Recommended Reading
Read More
Read More
About this Discussion
39 Replies
26 Participants
Last post:
tenntrav 1 mo ago
Mens Tennis Forums
A forum community dedicated to male tennis players and enthusiasts. Talk about everything from the ATP, NSMTA, to college Tennis and even everything about equipment. It's all here!
Full Forum Listing
Explore Our Forums
General Messages Chat Threads Tennis Betting Forum Non-Tennis Challengers threads
Popular Communities